On February 7th, the first CouchDB Day took place in the nice city of Hamburg, Germany. It was a blast! This blog post is a recap of the Day and will report about what happened.

But first of all, we would like to share some impressions with you. We were lucky enough to have a film team at the event and we are super excited to present the first CouchDB Day Mood Film.

As this was the first CouchDB Day, Robert and me took extra care of everything in advance. At least we think we did. So the day before the event, we met with Holger Blank, Klaus Trainer and Sebastian Rothbucher to set up everything in the location. Thanks again to Holger and SinnerSchrader for hosting us. We couldn’t have imagined a better place. You rock! 🙂

We had a main room with a capacity for approx. 120 people – the amount of attendees we expected. Furthermore, there was a lounge where we decided to serve breakfast and lunch.And we had two more conference rooms. The main room is that big so that we divided it into two rooms. So if counting correctly, we had four rooms for hacking, speaking or simply hanging around. Each with a projector for sure.

Preparing everything was quite easy because my former fine colleague Daniel Goos form SinnerSchrader had already setup the audio stuff and the fridge for drinks was filled ;-). So nothing stopped us from looking forward to the next morning. But we shall not forget to check out the party location and the beer they served there. That’s we did as our last task at this day.

We arrived at 08:00 in the morning. Pretty early for a Saturday but looking forward to an awesome event saved us from complaining about the time.

And believe it or not. There had already been some attendees waiting to get in. Cool start.

We opened doors at 08:30 and the people came in time. Awesome. The mega cool two by two Espresso machine started to roar. Everything was fine.

At 09:00 Robert and me gave the introduction and welcomed everybody. The first impression was a blast. With ~100 people attending, our “no show” rate was low. Perfect. 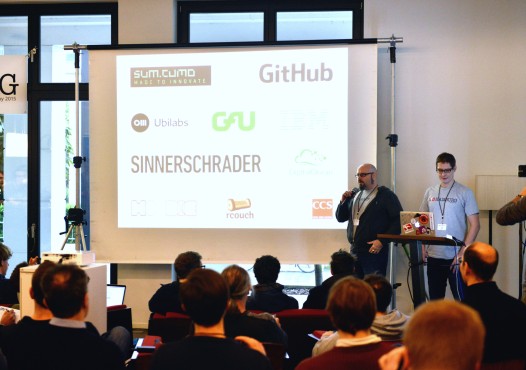 Introduction by Robert and Andy

After some info and proposals how we thought to run the day, it was our pleasure to welcome Jan Lehnardt as our keynote speaker.

But a lot more groups sat together and discussed or hacked. This was, for us as the organisers, exactly what we were looking forward to. So at this point of the day: mission accomplished.

As our idea was that all attendees work on and with CouchDB, we decided to have only three talks. After lunch, we were extremely happy to hear and see a live introduction to CouchDB 2.0 by Klaus Trainer.

And directly after Klaus, we saw Frank Mecklenburg with his talk How to replicate the Internet into your browser and a short Q&A.

This was perfect after a well received and yummy lunch provided by Schanzenstern Hamburg.

After these talks the attendees went back to form different groups and worked on various other things. Again – Cool!

At around 16:00 we served various cake and stressed the two by two Espresso machine again. It was delicious and extra sugar motivated everybody.

We recognised, that the time period between the lunch talks and the last talk was a bit long. Maybe everyone ate too much because it was that good ;-). So to not stress everybody’s mood, we asked Ólafur Arason if he would start 30 minutes earlier with his talk Reusing CouchDB cookies for token based urls. And so he did.

Well, after one more Q&A for Ólafur’s talk, we came to the end of the day. Robert and I were extremely happy that everything went that well and obviously everybody was happy with the day. So the last thing we had to ask the attendees is to wait a bit for a family photo and show them the way to the next whisky bar … aka the CouchDB Day party.

The party location was a bar in Altona called Laundrette. Funny fact: you can bring your laundry and wash it there ;-). The party was super awesome and the budget we had (and some extra 😉 ) was enough to make everyone happy. It was again a full success.

We already planned a CouchDB committer meeting for Sunday. And so we met in the Ubilabs office (thanks for hosting us again) and started to discuss the next steps to CouchDB 2.0. This day was also a success because hacking on CouchDB 2.0 resulted in a even more stable CouchDB 2.0 developer preview.

CouchDB Day 2015 was a blast. The feedback we received was extremely good. Some people already asked us when the next CouchDB Day will happen this year :). Please be patient and expect the next one next year.

All this would not have bend possible without our great sponsors. Please visit http://day.couchdb.org and say hello to them. You all rock!

And we also want to thank the people who helped to make this day so extremely successful. The people who talked about stuff in the groups, the speakers, the helpers, the video crew, the food crew, the photo crew and last but not least the attendees. The CouchDB Day would not have happened without you! You rock and you are awesome.

Extra special thanks go out to sum.cumo GmbH for doing all the financial stuff for us. And to Luigi Dileone for creating the awesome CouchDB Day logo. Thank you!

We are looking forward to see all of you next year. Because …

All the best for you from